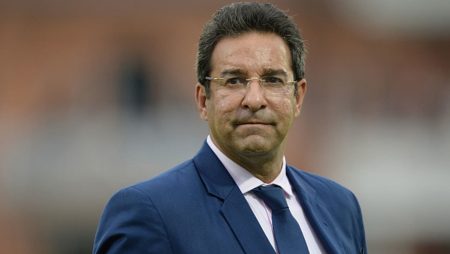 Wasim Akram speaks out against foreign coaches who refuse to visit to Pakistan. PCB invited Mickey Arthur to take up the coaching post after Najam Sethi was reinstalled as head.

Wasim Akram, a Pakistani speed icon, has expressed his thoughts on the problem of foreign coaches refusing to visit Pakistan. The administration has seen various changes after Najam Sethi assumed the job of Pakistan Cricket Board (PCB) president.

While the previous committee’s office-bearers were shown the departure doors. A new selection panel chaired by Shahid Afridi was constitute. In addition, the PCB president was eager to rehire Mickey Arthur as national team coach. However, because to the ‘unreliable atmosphere in Pakistan cricket,’ Arthur has opted to decline the post, according to several sources.

Wasim Akram expressed his thoughts on the matter, stating that the team should hire a Pakistan-born coach rather than a foreign coach.

“If you had asked me, I would have told you that international coaches will not come. Everyone is scare that the contract will also expire if the board changes. “If you can’t afford a foreign coach, get a Pakistani coach. ” Akram cited as saying by Pakistan Cricket.

The 54-year-old, who is the head of cricket at Derbyshire. Nervous about returning to Pakistan and taking on the post that he had previously held. According to a source, even if he opted to terminate his deal with Derbyshire, there was no assurance that his contract would be honored given the current situation in the PCB.

“Arthur inform Sethi that during the World Cup in 2019, the PCB administration lead by Ehsan Mani guarantee him his contract would be extend, but after Pakistan fail to enter the semi-finals despite winning four consecutive matches, his contract not honor,” a source told PTI.

“He was also concerned that even if he mutually terminate his long-term deal with Derbyshire and want to travel to Pakistan, there was no assurance his contract would be honored given the situation in Pakistan cricket,” the source continued.

Also Read: The director of the CSA has confirmed plans to include ‘Baby AB’ into international cricket.