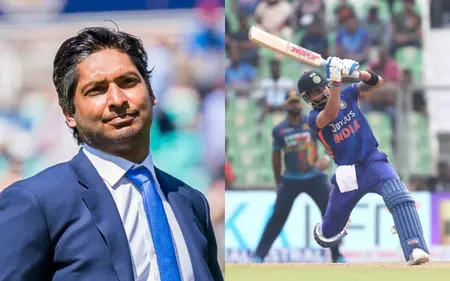 Virat Kohli looked amazing with his bat in the last ODI between India and Sri Lanka in Thiruvananthapuram, blasting the second century of the series. The great batsman was undefeated on 166 runs off 110 balls, hitting 13 fours and eight maximums.

The visitors were defeat by a score of 317 runs.

Kohli now has 46 hundreds to his record, tying him with former India great Sachin Tendulkar. Who finished his ODI career with 49 tons in 2012. The 34-year-old hitter is receiving a lot of plaudits from fans and former cricketers after this remarkable innings.

His unforgettable ton provided some wonderful moments in the commentary box throughout the game as well. When the statistics for the most centuries were presented on television screens. During Sri Lanka’s run chase, Kumar Sangakkara had a humorous reply.

The swashbuckling former Sri Lanka wicket-keeper batsman recorded 25 ODI tons in his career, placing him ninth on the list of ODI batsmen with the most hundreds. However, the screen only showed the top five centurions, prompting Sangakkara to respond by asking, “Where am I?” to the hilarity of his colleague pundit in the box.