Kenya has announced the Africa T10 League, which will take place in June 2023. 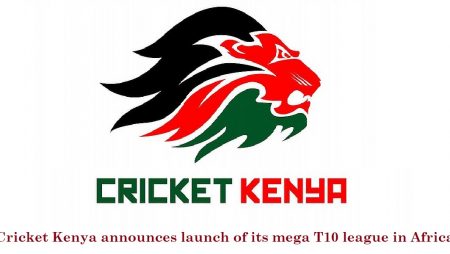 Kenya has announced the Africa T10 League, which will take place in June 2023. Cricket Kenya’s chairman Manoj Patel is hopeful that the introduction of a fast-paced T10 league will propel them back into the international fray.

The global popularity of T10 cricket has spurred one of cricket’s forgotten powerhouses. The Africa T10 league, the first of its type in Africa, is planned to begin in June of next year.

Six clubs will fight for the title in a 34-game tournament in the newly established league. With some known worldwide talents on show, the African board wants to recover their lost glory with the next competition. In each playing eleven. Africa’s own global league will contain one associate player, one African player, two Kenyan players, and seven other global players.

Kenya captured the attention of the globe during the 2003 World Cup as they advanced to the semi-finals of the huge ICC event. However, the African band’s prominence short-lived, as they faded into obscurity throughout the previous decade. Manoj Patel, the head of Cricket Kenya, believes that the introduction of a fast-paced T10 competition will catapult them back into the international fight.

“We are pleased to collaborate with Pacific Star Sports to create a Global short-format. Yearly cricket competition.” Our approach would assist Kenya Cricket in particular, and African Cricket in general. “We also look forward to inviting all global T20 stars to participate in this, which will be the second of its kind after the UAE-based T10 League,” Manoj Patel, Chairman of Cricket Kenya, said in an interview with Business Wire.

Kenya cricketers will benefit greatly from the competition.

Pacific Star Sports (a group business of Toyam Sports Limited), the proposed league’s official partner. Ali Akbar Khan, also expressed joy in their participation with the competition and believes that this effort would bring high-quality cricket back to Kenya.

“The Africa T10 tournament would be a celebration of cricket and African hospitality. ” We are excited to create one of the most entertaining T10 cricket forms in the world. The goal of introducing high-quality cricket to Kenya. “This would not only be a tremendous learning experience for Kenyan cricketers. It would also be first-hand entertainment and a spectacular cricketing spectacle for a global audience, fueled by the top international players for local fans,” Ali Akbar Khan said.