Sophie Ecclestone was chastised for violating the ICC Code of Conduct. 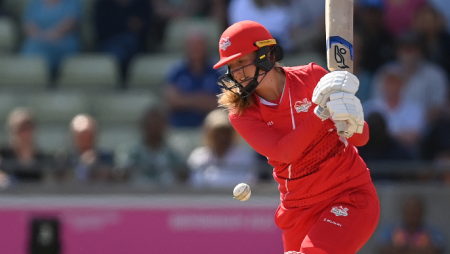 Sophie Ecclestone was chastised for violating the ICC Code of Conduct. Ecclestone threw out the chair after being caught in the 18th over of the game.

England’s Sophie Ecclestone received an official reprimand for violating Level 1 of the ICC Code of Conduct during the Commonwealth Games Women’s T20I bronze medal match against New Zealand on Sunday in Birmingham. Ecclestone found to have violated Article 2.2 of the International Cricket Council’s Code of Conduct. For Players and Player Support Personnel, which prohibits. “Abuse of cricket equipment or clothing, ground equipment or fixtures and fittings during an International Match.”

In addition to this, one demerit point has been added to Ecclestone’s disciplinary record, for whom it was the first offence in a 24-month period. The incident occurred following Ecclestone’s dismissal in the 18th over of England’s innings when on return to the pavilion, she knocked a chair over with her bat.

Ecclestone admitted the offense and agreed to the sanction. Proposed by GS Lakshmi of the Emirates ICC International Panel of Match Referees, so no formal hearing was required. The charge leveled by on-field umpires Lauren Agenbag and Eloise Sheridan, third umpire Claire Polosak, and fourth umpire Vrinda Rathi.

Level 1 violations result in a minimum of an official reprimand, a maximum penalty of 50% of a player’s match fee, and one or two demerit points.

England is denied a bronze medal.

In terms of the match, England lost two games in a row and missed out on a bronze medal. They were defeat by India in the semi-finals and then by New Zealand in the bronze medal match. Nat Sciver’s team couldn’t put up a good score with the bat and collapsed after opting to bat first. In their 20 overs, England could only manage 110 runs for the loss of nine wickets.

Sophie Devine responded with a brilliant half-century, remaining unbeaten on 51 off 40 deliveries. New Zealand won the Bronze Medal at CWG 2022 by chasing down the target in the 12th over with eight wickets in hand.