The Incredible Catch of Tim Southee To Dismiss Kagiso Rabada: It Shouldn’t Be Missed 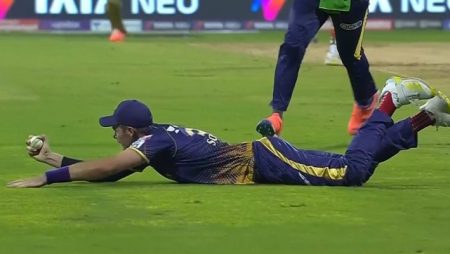 The Incredible Catch of Tim Southee To Dismiss Kagiso Rabada: It Shouldn’t Be Missed

Tim Southee of the Kolkata Knight Riders sprinted from long-off to mid-on before taking a challenging; catch to finish Kagiso Rabada’s thrilling innings on Friday. Punjab Kings lost wickets at regular intervals after a strong start and appeared to be heading for a low score; but Rabada gave them a boost at the end, scoring 25 runs with four boundaries and a six.

In the penultimate over, Andre Russell produced a slower delivery that the South African; pacer attempted to swipe but ended up slashing far into the sky.

While it appeared that the ball would land in no man’s land; Southee did a fantastic job of covering a lot of territory before catching Rabada with a diving catch.

PBKS were bowled out for 137 after a run-out off the very next delivery.

Southee had a fantastic day on the field, taking two wickets at the Wankhede Stadium; and became the first New Zealand bowler to reach 250 wickets in T20s.

KKR’s bowling attack was led by Umesh Yadav, who had his best IPL numbers of 4/23 in his career.

read more: After the World Cup Qualifying Match vs Ecuador, Lionel Messi is irritated after a pitch invader forcibly  rabs him to take a selfie.

KKR’s chase got off to a shaky start when they were reduced to 51/4 in seven overs; but Andre Russell blitzed 70 off 31 deliveries to guide his team to victory with more than five overs to spare.

With the victory, KKR moved to the lead of the IPL 2022 points table; having won two of their first three games.