Faf du Plessis heaps praise on Dinesh Karthik, saying, “As cool as MS Dhoni can get in the last 5 overs.” 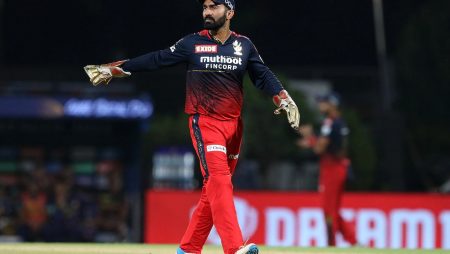 Faf du Plessis heaps praise on Dinesh Karthik, saying, “As cool as MS Dhoni can get in the last 5 overs.”

With only three wickets in hand, Royal Challengers Bangalore needed 7 runs off the last six balls to win, but Dinesh Karthik held his cool to strike a six and a four to lead RCB to a three-wicket win over Kolkata Knight Riders at the Dr DY Patil Sports Academy in Navi Mumbai on Wednesday.

RCB captain Faf du Plessis heaped admiration on the seasoned wicketkeeper-batter, comparing his coolness in the death overs to that of the famous MS Dhoni, with whom du Plessis has shared the dressing room for numerous years.

“DK’s experience paid off in the end, as cool-calm runs were never far away. In the last five overs, he’s probably as calm as MS Dhoni can be “In a post-match presentation, Faf du Plessis stated.

With RCB chasing 129, they got off to a shaky start, with Umesh Yadav and Tim Southee bowling brilliantly in the Powerplay to reduce them to 17/3.

After then, RCB had to play cautiously, resulting in a low-scoring thriller out of a simple change.

“I’m quite pleased. Good win, obviously chasing small scores, you want to stay positive and not leave it too late, but their seamers bowled well “Faf du Plessis elaborated.

RCB’s score of 205 was chased down by Punjab Kings in their season opener at the same venue.

“There was seam and bounce tonight, but it swung a little more the first night,” the RCB captain said of the difference in the surface between the two matches.

Despite the victory, du Plessis believes his bowlers might have done a better job in bowling out Kolkata Knight Riders for 128 in 18.5 overs.

read more: Sheldon Jackson of KKR bowls a one-handed blinder to dismiss Sherfane Rutherford of RCB in the IPL 2022.

The Faf du Plessis-led side has won their opening match of the season, and their next match is on April 5 against Rajasthan Royals.