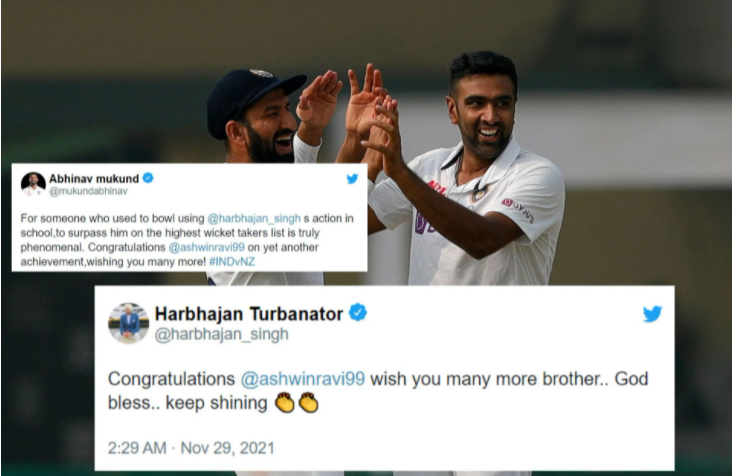 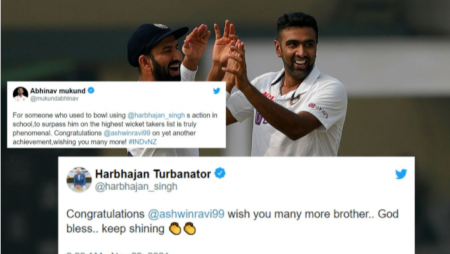 IND vs NZ 2021: India’s star off-spinner Ravichandran Ashwin (418 wickets) overtook Harbhajan Singh’s 417 wickets. As a result, he became India’s third-highest wicket-taker in Test cricket. On this list, only Kapil Dev (434 wickets) and Anil Kumble (619 wickets) have more than him.

On Monday, against New Zealand in Kanpur, Ashwin attained this milestone in his 80th Test match. He has the best bowling strike rate and average among India’s top ten wicket-takers in Test cricket. He has 418 wickets at a strike rate of 52.7 and an average of 24.53. IND vs NZ 2021

Fans and past cricketers impressed by Ashwin’s success and flocked to Twitter to congratulate him. They applauded him for consistently demonstrating exceptional skill, tenacity, and consistency throughout time. Fans believed he would take a lot more wickets in the coming years.

After attaining a remarkable milestone in Test cricket today, Ashwin spoke to the broadcasters. He stated that in the next 3-4 years, he hopes to make some special moments on the field. He doesn’t want to think about other things too much.

“Absolutely nothing at all, to be honest (how does it make him feel). I know these are milestones that are constantly kept on tab and it’s wonderful. Rahul bhai, ever since he has taken over, he’s kept saying the same thing [that] how many ever wickets you take, how many ever runs you make in 10 years time, you won’t remember them. It’s the memories that matter so I want to have some special memories going forward in the next 3-4 years.” he said

On a sluggish pitch at Kanpur, Ashwin (3/35), Jadeja (4/40), and other Indian bowlers gave it their all. However, the tenacious New Zealand squad managed to draw the match, finishing with a score of 165/9. The second Test, which begins on December 3, will now be held in Mumbai.

Read more: Aakash Chopra has criticized India for not declaring their second innings earlier on Day 4 of the Kanpur Test against NZ

Visit also: Cricket News: Greg Chappell says “We were stuck with Plan A, and we didn’t have a backup plan”