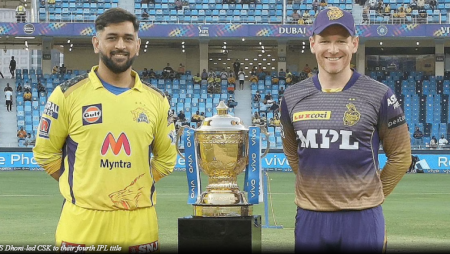 Former Australia spinner Brad Hogg observed a significant difference in captaincy between Eoin Morgan and MS Dhoni, particularly when both teams were under duress.

CSK captain Virat Kohli added a fourth IPL trophy to his storied career in Dubai, as the Chennai-based franchise successfully defended its total against KKR.

Both times, the goalkeeper missed chances for an early breakthrough, according to Hogg. Dinesh Karthik missed out on a stumping that would have sent Faf du Plessis back to South Africa. MS Dhoni missed a reasonably easy chance to dismiss Venkatesh Iyer in the second innings.

“Both the keepers had a bit of a nightmare early on. Karthik missing the stumping of du Plessis was a big moment in the game and then we had MS Dhoni, the legend, dropping Venkatesh Iyer early on, and then he also played a good knock.  Hogg said

“If Iyer had knocked around for around 3 or 4 more overs he could have got KKR into a more commanding position because Gill was not able to up the tempo. I’ve got to say MS Dhoni was a little bit cooler than Morgan when it came to captaincy,” he added

In the first innings, Eoin Morgan struggled to control CSK’s speed, particularly in the middle overs. KKR had a massive total to chase to win their third IPL title, thanks to three important partnerships from the CSK unit.

“MS Dhoni was not running up to his bowlers and trying to slow things down and make sure they were ready with the plan. When you go into the finals, you don’t want to try and change the momentum, you have to make sure the bowlers are in rhythm. Morgan was standing in front of the bowler during the back end of the CSK innings, what that does to a bowler is that he loses his momentum and tends to be negative as well.” Hogg added

Visit also: James Anderson says “It is dangerous to start talking like that” in T20 World Cup