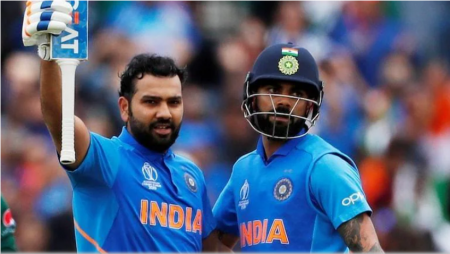 Sunil Gavaskar, a former Indian cricketer, has chosen Rohit Sharma to follow Virat Kohli as India’s captain in the T20 World Cup for the next two years. Rohit has been Kohli’s white-ball deputy since 2017. He is expected to take over as T20 skipper after Virat Kohli announced his retirement following the 2018 T20 World Cup in the UAE.

Gavaskar stated on the Star Sports show ‘Cricket Connected’ that Rohit would be his preference to head Team India in the T20 World Cup in 2022. “Definitely, Rohit Sharma for the next World Cup. With World Cups back-to-back, you don’t want too many changes in the captaincy,” Gavaskar said.

While the national selectors have yet to identify Virat Kohli’s replacement in T20I cricket, Rohit Sharma, the five-time IPL champion, is widely expected to be granted the position.

“I am looking at KL Rahul as the vice-captain of the Indian team. I would also keep Rishabh Pant in mind,” he said.

Pant is a strong candidate for the future captain’s deputy. According to Gavaskar because he is a street-smart cricketer. A trait he has demonstrated to the fullest while captaining Delhi this season.

Therefore, The way he led a star-studded Delhi team, the bowling changes he’s making in the T20 format. Particularly the way he’s employing Nortje and Rabada in such a creative manner shows he’s a street smart captain.

“And you always want a street smart captain who can read situations and act immediately. Yes, Rahul and Pant are the two guys I would look at as vice-captains,” he added.

Visit also: Brad Hogg says “I think MS Dhoni is going to retire” in the IPL 2021