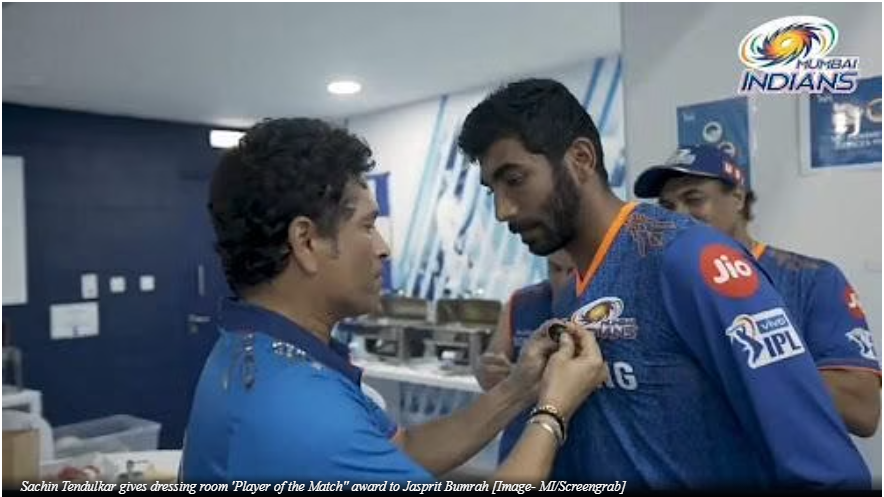 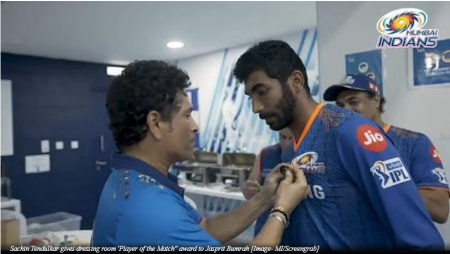 Mumbai Indians, the defending champions, won their first match in the UAE leg against Punjab Kings at the Sheikh Zayed Stadium.

It was a team effort, and the five-time champions recognized it. By awarding the “Player of the Match” award to five different cricketers in the dressing room.

Tiwary and Coulter-Nile received respected badges from fielding coach Robin Singh and Director of Cricket Zaheer Khan. The honors were given to Krunal, Hardik, and Bumrah by head coach Mahela Jayawardene, bowling coach Shane Bond, and mentor Sachin Tendulkar, to the delight of the rest of the team.

This is Mumbai’s first victory after three straight losses against Chennai, Kolkata, and Bangalore. With this victory, the Rohit Sharma-led team has maintained their chances of making the playoffs.

In the video, southpaw Tiwary acknowledged the significance of the triumph. Thus, Saying that it came at the perfect time for the reigning champions, as it will help them gain momentum as the tournament approaches its conclusion.

Therefore, losing two quick wickets in the form of skipper Rohit Sharma and Suryakumar Yadav, Tiwary was instrumental in Mumbai achieving their aim of 136.

Though The seasoned middle-order batsmen handled the strain admirably, scoring a 37-ball 45 to provide the groundwork for Hardik and Pollard to launch the innings.

Hardik Pandya contributed an undefeated 30-ball 40, while Pollard struck two lusty punches to seal the victory for his squad. Pollard was named ‘Player of the Match’ after taking two key wickets in the form of Rahul and Chris Gayle.